The Urban Redevelopment Authority of Pittsburgh (URA) is requesting proposals from redevelopers or redevelopment teams (Redeveloper(s)) to purchase and redevelop multiple sites along the Second Avenue/Irvine Street Corridor in the Hazelwood neighborhood of the City of Pittsburgh (City). Redevelopers may submit responses for individual parcels, several parcels, or the entire site. The goal of this RFP is to select Redeveloper(s) who can complete a high-quality, mixed-use redevelopment project that is reflective of the concepts and principles contained in the community’s neighborhood plan, the Greater Hazelwood Neighborhood Plan (GHNP). See Section 4.D. for more information about the GHNP.

The Urban Redevelopment Authority of Pittsburgh (URA) is requesting proposals from redevelopers or redevelopment teams (Redeveloper(s)) to purchase and redevelop multiple sites along the Second Avenue/Irvine Street Corridor in the Hazelwood neighborhood of the City of Pittsburgh (City). Redevelopers may submit responses for individual parcels, several parcels, or the entire site. The goal of this RFP is to select Redeveloper(s) who can complete a high-quality, mixed-use redevelopment project that is reflective of the concepts and principles contained in the community’s neighborhood plan, the Greater Hazelwood Neighborhood Plan (GHNP). See Section 4.D. for more information about the GHNP.

A tentative schedule for the proposal selection process is below. Redevelopers must be available for the following meetings, interviews, and deadlines.

* Interested Redevelopers should plan to attend the RFP Q & A session. The session is not mandatory; however, it will provide interested respondents with an opportunity to connect, and potentially team, with minority and women-owned business enterprise (MWBE) firms that provide professional services. Architectural, community engagement, and engineering firms will be among the MWBE firms present.

The meeting location for the RFP Q & A session will be held at the Pittsburgh Fire Fighters Local No. 1, 120 Flowers Avenue, Pittsburgh, PA 15207. Please RSVP your attendance to Joy Akrie, jakrie@ura.org. A continental breakfast will be provided.

Please note there will be no site tour for this RFP. 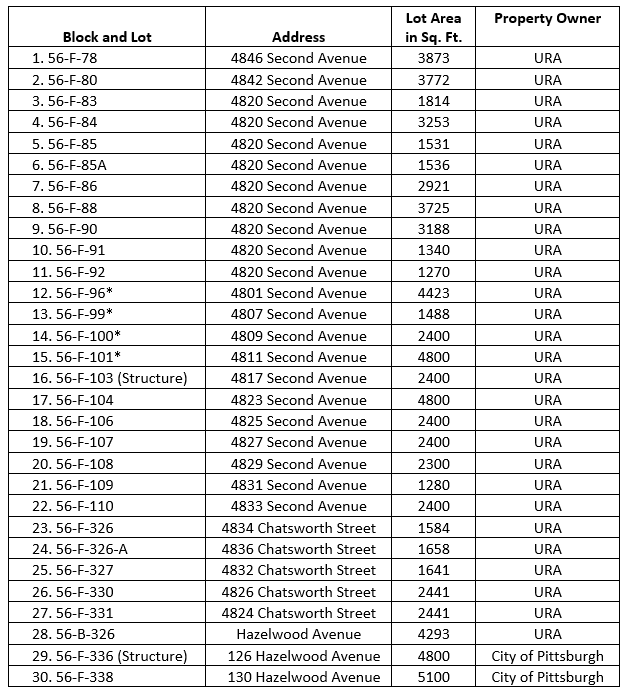 The URA will acquire the City-owned property and convey through URA’s Disposition Process (Exhibit “A”).

* PennDOT has requested to acquire a small portion of the property closest to Second Avenue to expand the Right of Way for the future widening of Second Avenue. Proposals should take this into consideration.

A site map showing the development area can be found below. 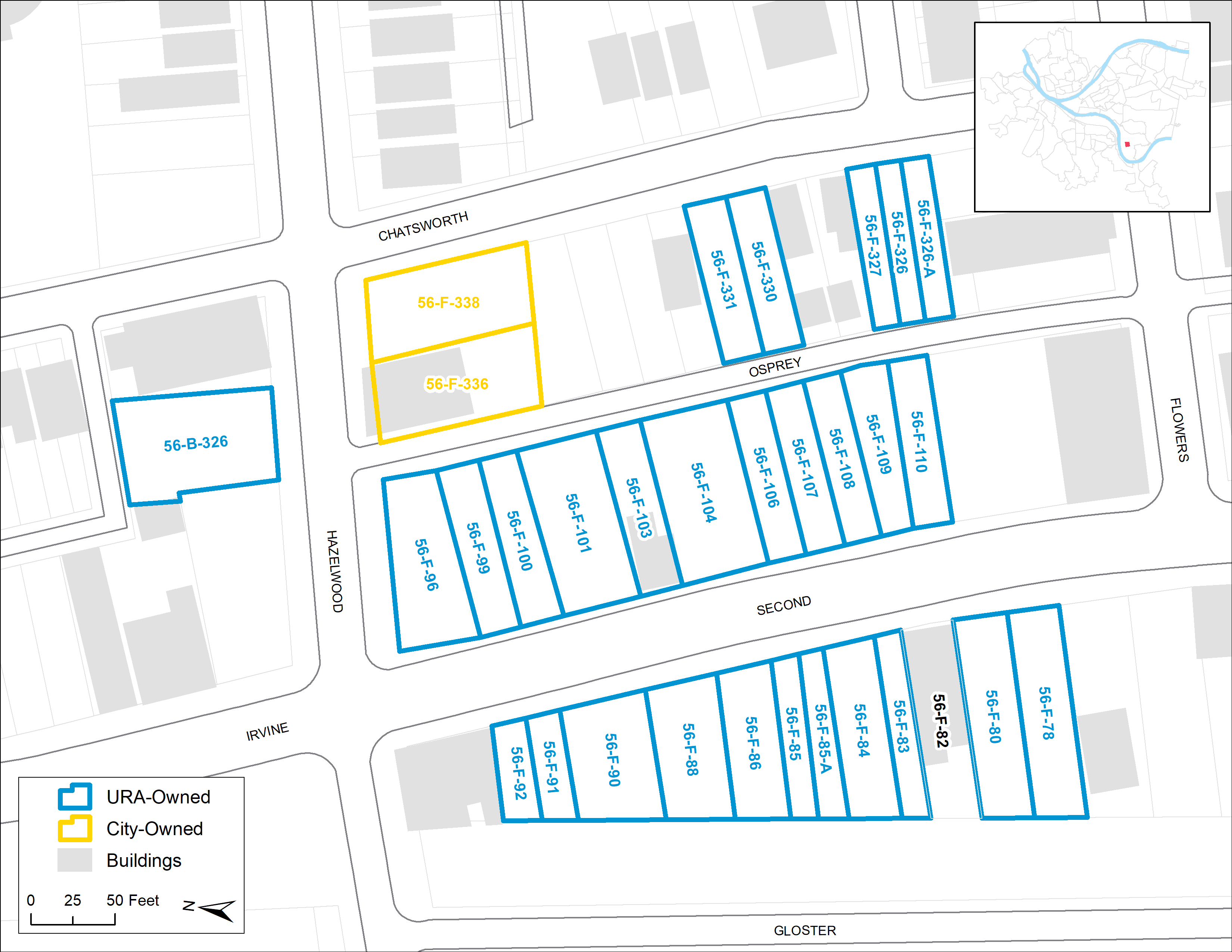 Hazelwood Initiative (HI) owns the property located at 56-F-82. Any questions about this property should be directed to Sonya Tilghman at 412-421-7234 or stilghman@hazelwoodinitiative.org.

The URA is the economic development agency for the City of Pittsburgh, committed to creating jobs, expanding the City’s tax base, and improving the vitality of businesses and neighborhoods within the City. Incorporated in 1946 as one of the first redevelopment authorities in the United States, the URA achieves this mission by assembling, preparing and conveying sites for major mixed-use developments and by providing a portfolio of programs that include financing for business location, relocation, and expansion, housing construction and rehabilitation, and home purchases and improvements, among many others. The URA conducts these activities using unique powers granted by the Commonwealth’s Urban Redevelopment Law to deploy and attach conditions to the use of public subsidy and the disposition of publicly-owned land.  The URA is committed to equitable development and incorporates best practices for equity and inclusion into the URA's internal and external policies and activities.

The URA is a legal entity separate and distinct from the City of Pittsburgh. The URA works closely with the City in fulfilling its redevelopment mission.

Hazelwood is a primarily residential neighborhood situated in Pittsburgh’s southernmost valley above the Monongahela River. It shares a border with four other City neighborhoods: Glen Hazel to the east-southeast, Squirrel Hill South to the east, Greenfield to the north, and South Oakland to the northwest. The two arterial roads that provide access to the neighborhood are Second Avenue – running north and south – and Hazelwood Avenue – running east and west. Hazelwood is accessible to Pittsburgh’s major employment hubs – Oakland and Downtown Pittsburgh - via an approximately 10- to 15-minute drive on Second Avenue. Johnston Avenue, a local collector road that runs east-west, allows access to the Waterfront in Homestead by way of Glen Hazel and Squirrel Hill South neighborhoods.

Hazelwood is home to a number of local institutions including the Hazelwood Branch of the Carnegie Library of Pittsburgh which relocated in 2014 to the business corridor at the intersection of Second Avenue and Tecumseh Street; Propel School which opened in 2014; several churches and faith organizations; and many community-serving not-for-profit organizations working to improve the quality of life in Hazelwood.

Hazelwood also features significant greenspace (parks and groves) including a portion of the 183-acre greenspace known as Hazelwood Green. These greenspaces are part of the rich recreational amenities within the neighborhood. Other recreational amenities include the Lewis Playground, located on Irvine at Minden Streets and a KaBOOM! playground located between Lytle Street and Roma Way, which opened in September 2016. Popular bicycle trails also run through Hazelwood including the Eliza Furnace Trail, which leads to Downtown and crosses over the Hot Metal Bridge onto East Carson Street in the South Side, and the Duck Hollow Trail which leads to Oakland’s universities, parks, and museums.

The URA has created business district market profiles to provide a statistical snapshot of the area. The market profiles use a 2-minute drive time radius as a designation of the trade/market area around the center of the commercial corridor. These reports are meant to provide basic information and should not be considered conclusive comprehensive market studies. Data has been collected through ESRI Business Analyst, a GIS-based market data program. The 2018 Hazelwood’s Market Profile – Second Avenue Commercial District can be accessed here:  https://www.ura.org/business-district-profiles/hazelwood-second-avenue.

The predominantly residential neighborhood of Greenfield is located half a mile north from the site, easily accessible via Hazelwood Avenue. Recent years have shown considerable growth in Greenfield’s for-sale and rental residential markets. In 2010, Greenfield’s population was 7,294, and by 2017 it had grown to 10,039. Bolstered by a mix of young families and students, Greenfield has a minimal commercial footprint relative to its population; many residents leave the neighborhood to shop and dine. The ability to incorporate Greenfield’s burgeoning market into this site’s catchment area makes it all the more exciting as a development opportunity.

Hazelwood is home to several non-profit, advocacy organizations that are dedicated to improving the quality of life for Hazelwood’s residents. These organizations include Hazelwood Initiative, Inc. (HI), a Community Development Corporation dedicated to improving the neighborhood’s economic context by pursuing redevelopment projects; Center of Life, a non-profit organization focused on empowering the Hazelwood community through programs and services; and the Greater Hazelwood Community Collaborative (GHCC), a coalition/umbrella organization whose members represent a wide variety of resident-, nonprofit-, business-, and governmental-interests.

Over the past two years, the GHCC-led planning process has been carried out through a steering committee that convened community meetings, focus groups, and interviews and empowered community action teams to inform, organize, and inspire resident participation. The planning process is near completion and the steering committee anticipates releasing a draft of the GHNP in late summer 2019. A copy of this draft will be posted on Public Purchase when available. The GHCC released an executive summary of the Greater Hazelwood Neighborhood Plan in late June 2019. A copy of this executive summary is provided as Exhibit “B.”

F.  Public Funding and Other Considerations

Please note that the URA is currently using Public Purchase as its new RFP Platform.

Redevelopers must register online at https://www.publicpurchase.com/ to submit their proposal.  Additionally, thirteen (13) bound hard copies and one (1) electronic copy (flash drive, cd, or email) should be sent to the address below on or before the due date shown on the cover of this RFP:

All questions regarding this RFP should be submitted through the Public Purchase platform. See instructions on registering for and accessing Public Purchase in Exhibit “C.”

The URA will not reimburse firms for any expenses incurred in preparing responses to this RFP.

The following proposal requirements will serve to establish a Redeveloper’s overall capacity to complete this project and to meet the requirements and obligations associated with the land.  Each submission should include the following:

Proposal responses will be evaluated by a review committee comprised of community representatives, representatives from local elected officials, a representative from the Department of City Planning, and various URA staff. The URA intends to make a recommendation to its Board to enter into exclusive negotiations with one or more Redevelopers.

One or more Redevelopers may be asked to meet with the selection committee in a formal interview process.

A Redeveloper will be selected based on, but not limited to, the criteria listed below. The URA reserves the right to weigh each of these criteria differently and as set forth in Section 9, waive any of these criteria in its discretion.

One or more Redevelopers will be recommended to the URA Board based on the overall quality of the proposed project. The URA does not sell land for speculative purposes. Any such proposal to acquire and hold the land with construction to occur when, and if, it is successfully marketed will be rejected. Furthermore, the URA will reject any Redevelopers which intends to purchase the entire site but develop only a portion of that site.  If that is the intention, the Redeveloper should submit a response for a portion of the site.

The URA will follow its Disposition Process (See Section 8 below) which includes significant design review and construction oversight. The URA Board must approve any and all Redevelopers who purchase URA land.

Should the URA Board select a Redeveloper for the site or any portion of the site, such Redeveloper(s) will be required to comply with the URA’s Disposition Process. As part of this process, the Redeveloper must show that all funds needed for the fully-realized project are available at the time of closing. In order to give the community a level of comfort that the site will be responsibly redeveloped, the URA will review the Opinion of Probable Cost and construction plans against the evidence of financing to determine if the information presented is reasonable and corresponds. The URA will not close on a property until all the terms of the disposition process are fulfilled. See Exhibit “A” for Disposition Process Overview.

The URA shall have the right to verify the accuracy of all information submitted and to make such investigation as it deems necessary to determine the ability of a Redeveloper(s) to perform the obligations in the response. The URA in its discretion reserves the right to reject any response when the available evidence or information does not satisfy the URA that the Redeveloper(s) is qualified to carry out properly the obligations of the response; is a person or firm of good reputation or character for strict, complete and faithful performance of business obligations; or if the Redeveloper(s) refuses to cooperate with and assist URA in the making of such investigation.