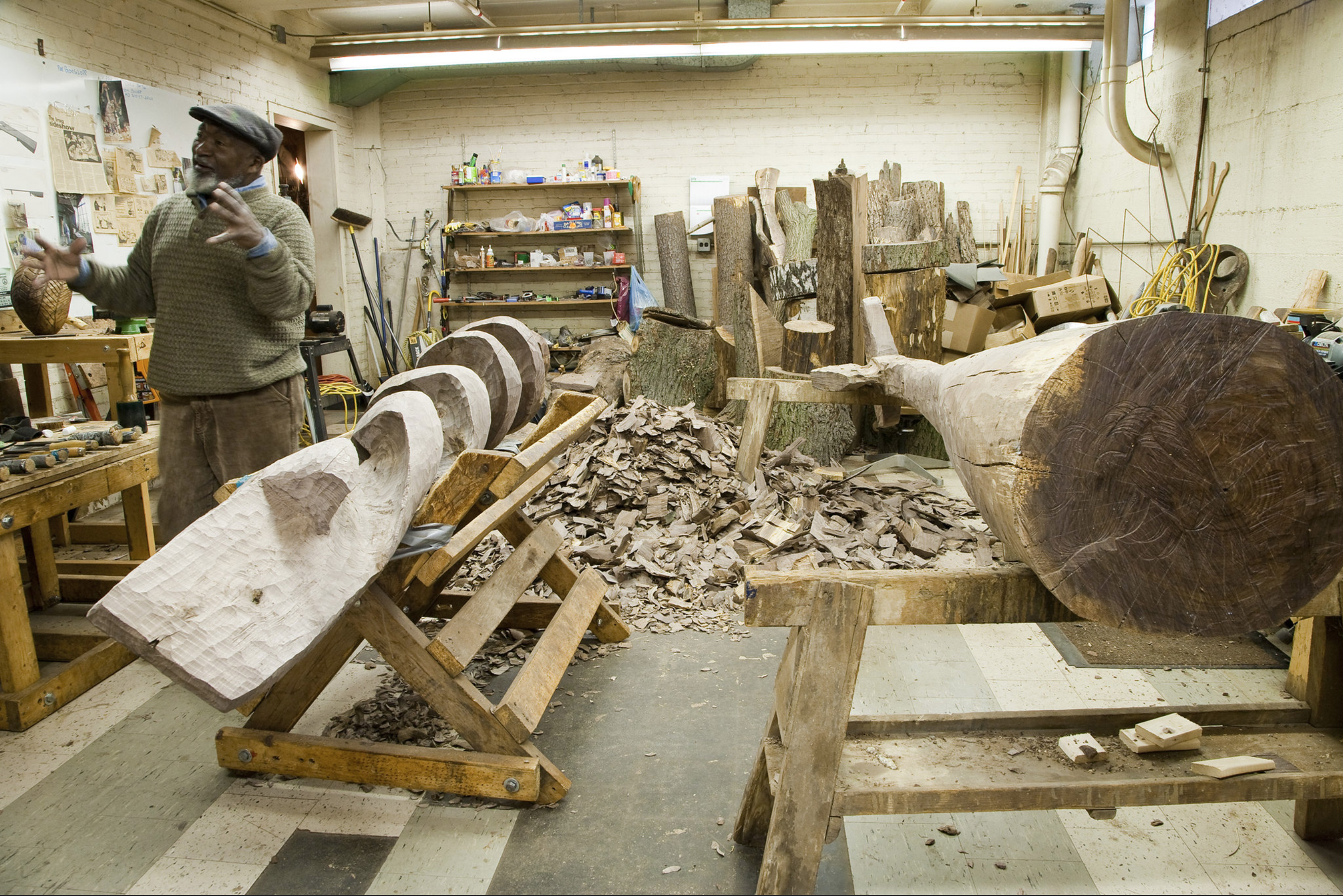 Thaddeus Mosley, a 94-year-old sculptor from Pittsburgh, is nationally and internationally recognized for his work. Most recently, 20+ sculptures were on exhibit at Karma in New York. Now, a selection of Mosley’s three wood bronze sculptures, Region In Suspension, Oval Continuity, and Branched Form, will find a permanent home in the public Eastside Bond Plaza in the City of Pittsburgh’s East Liberty neighborhood.

The Mosites Company worked with the community, philanthropy, State Rep. Ed Gainey, and the URA to integrate local artists into its master development at the Eastside Bond Transit Center. The Eastside Bond Plaza will be the final part of this effort establishing a public art installation at an accessible pubic realm and major transit center location.

The Pittsburgh-based artist has been around for some time. Mosley was born and spent his early life in New Castle, PA but has been in Pittsburgh since 1946 when he attended the University of Pittsburgh to study English and Journalism. After working briefly for the Pittsburgh Courier as a sportswriter, he went on to make his living as a postal worker for 40 years.

The self-taught artist started doing sculptures in the late 50s, all of which are made from trees coming from the Pittsburgh and Southwestern PA canopy.

How would you describe your work?

I would mostly say my work is animated abstraction.

What was the inspiration for the sculptures that are being installed in the Eastside Bond Plaza?

The inspiration is mainly coming from everything I do, but ideas I have about sculpture, and it’s more just coming to work every day and working on stuff. So, some of those pieces are coming from the Karma gallery I’m in in New York. They were made for a show that I did in February 2020, before everything shutdown.

How long did it take to create each of those sculptures?

On the average, I’d say 2-3 months, but for some of my bigger sculptures it takes longer. Some things have taken almost 4 or 5 months. I did a piece that’s in the (David L. Lawrence) Convention Center called Three Rivers Bench and that took about 6 months or so to do.

I have a large collection of gauges, chisels and mallets, and most of my stuff is hand carved. Ken Love (local documentary filmmaker) made a DVD some years ago for a Black History Month event at the University of Pittsburgh. That DVD sort of demonstrates what I do and the basis for what I do. 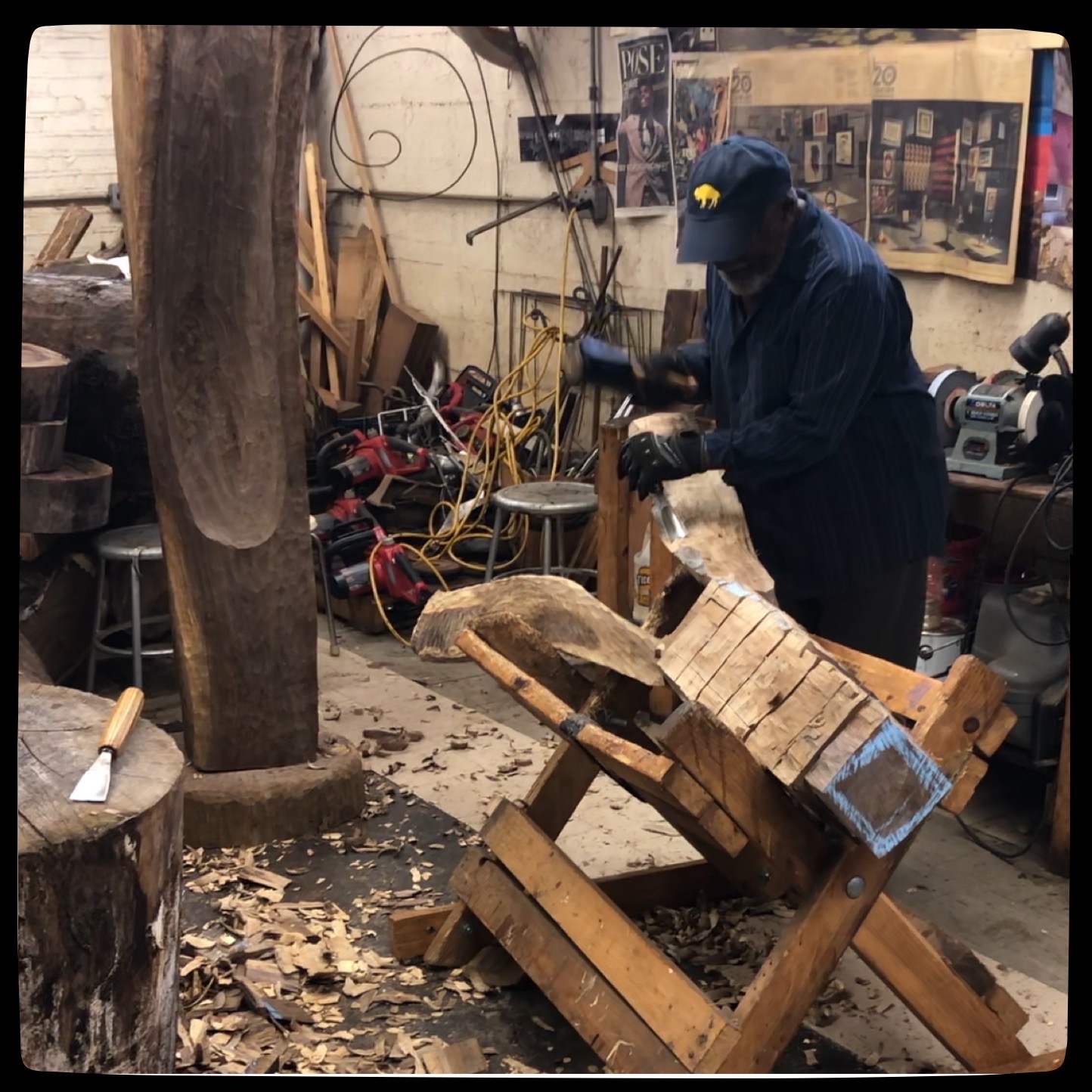 What does it mean to you to have your artwork showcased in this high-traffic public space in East Liberty?

I think it’s always interesting that there’s art in public spaces and for me, I’ve never had a sculpture in East Liberty. I have friends that have sculptures there like Virgil Cantini’s Joy of Life sculpture (prominently located next to the East Liberty Presbyterian Church and Carnegie Library branch). I’m hoping it will be interesting to the public and hopefully that young people will see it and it might inspire some people to be immersed in art, if not wanting to be artists themselves. 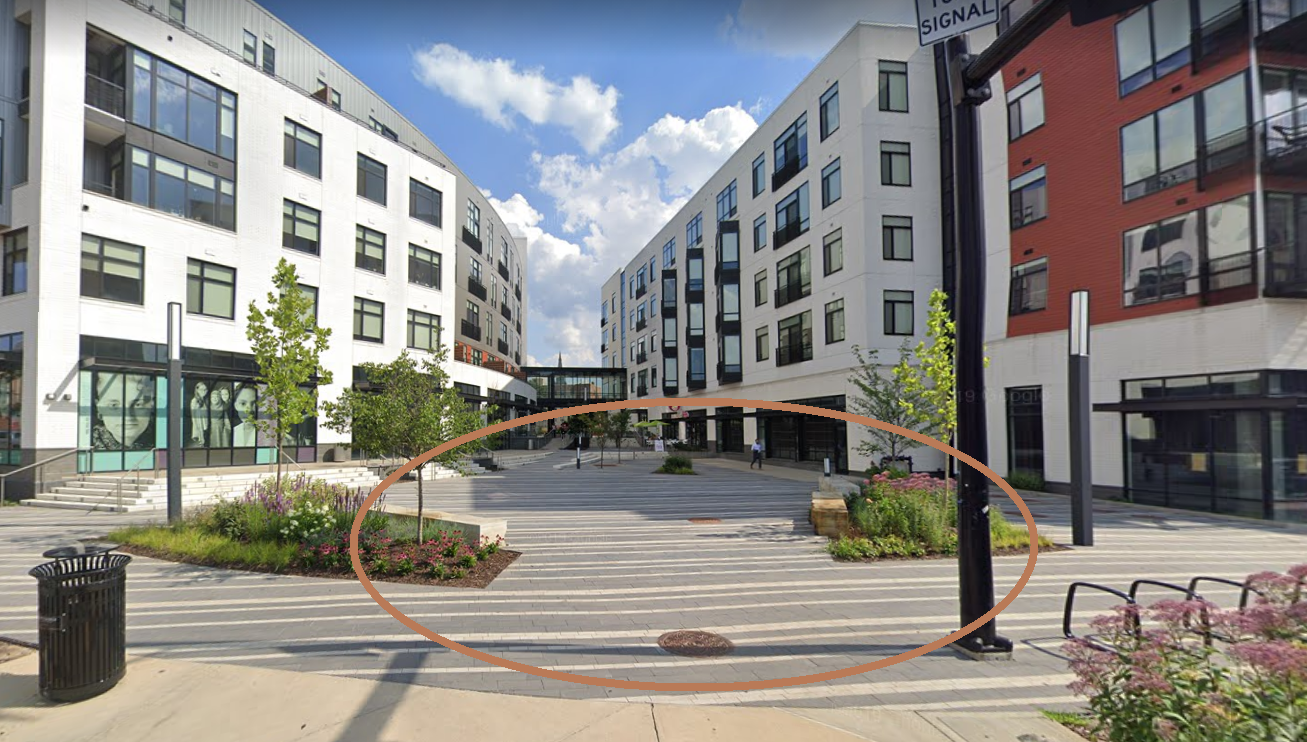 The Eastside Bond Plaza connects East Liberty to Shadyside and serves as a community meeting space for local residents, visitors and commuters. Pictured is the site location where the sculptures will be installed.

How can artwork impact the Pittsburgh community, especially after such a challenging year?

I know not many people are out and about right now, but I think that anything that is interesting and has a strong visual presence in the community will be lasting and not just be something that is transitory during a particular time of year, or a certain instance. I would like to think [this public art] will have an impact as long as it’s visible and as long as it’s sitting in the plaza. Just like when people go to where I have public art pieces in the Hill District or the pieces that are on North Side or in the Convention Center. So, I’m thinking that if it has enough quality and enough interest, the impact will be lasting.

Are you working on anything right now or have something coming up?

I work every day while I can and I’m working toward an exhibition at the Baltimore Museum next October. But I’m always working in case something comes up, and the gallery I’m associated with, they’re showing some things in group shows in London and Amsterdam next month. So, I always have to have new ideas or at least an extension of the ideas or variations of the works I already have.

Where do you get the ideas for your work? Does it just come to you?

Are there other artists that have been big influences in your art career?

Mostly my influences come from two or three different sources. Some probably that are subconscious but mostly, I’ve been influenced by Constantin Brâncuși, Isamu Noguchi, and African tribal art. Those are my main influences and some of this has been sort of molded into one idea from three different sources. So, whether you see it or you feel it…but I think the idea is to do things that get people’s attention, and that they can relate to, and also, they can investigate.

If you’re interested in learning more about the artist, attend the Artist Talk: Thaddeus Mosley in conversation with Kilolo Luckett virtual event this Thursday, January 14 at 6 p.m., and check out the publications below. Be sure to check out Thaddeus Mosley’s sculptures at the Eastside Bond Plaza after the unveiling on January 15, 2021!

Important Notice: The URA Will No Longer Use Public Purchase