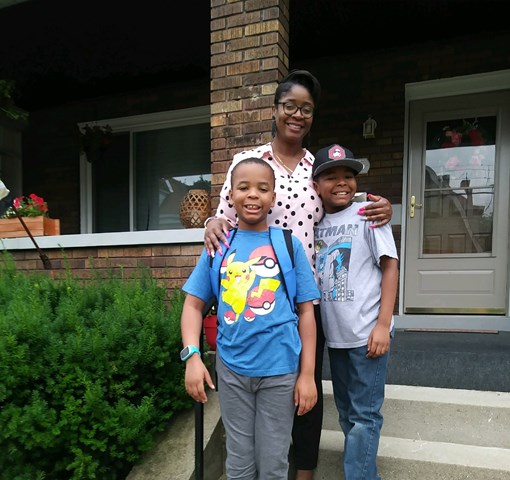 Several years ago, Sheraden resident Tara Bailey attended a housing fair sponsored by Councilwoman Theresa Kail Smith, Pittsburgh Community Reinvestment Group and the URA. There she learned about the Neighborhood Stabilization Program (NSP), which ultimately led to her buying her first home.

The Neighborhood Stabilization Program, run by HUD, funds the stabilization of communities that have suffered from foreclosures and abandonment. The Pittsburgh Housing Development Corporation (PHDC), URA’s non-profit housing development affiliate, administers NSP funds through grants to homebuyers to purchase and rehabilitate residential properties that have been foreclosed or vacant and abandoned.

PHDC sold and rehabbed seven foreclosed properties in the Sheraden neighborhood for a total development cost of $943,000, of which $493,400 came from NSP Grant funds. All the homes, required to be affordable to buyers, were sold to first time homebuyers.

In 2014, URA Development Officer Claren Healey showed Bailey a home that was available through the program.

“From the moment I entered the house, I knew it was meant for my children and me to live there. I had visions of my boys walking through the front door as grown men,” Bailey said.

Bailey’s home received an NSP fund allocation of around $24,000 from the URA for the rehabilitation work.

“I had the best experience working with Claren. She was patient, understanding and she walked me through the process step by step. Claren was very attentive and knowledgeable,” Bailey said.

“I was so happy to help her buy her first home. Such a success!” Healey said.

“Buying my home drastically improved our quality of life. My children have a safe space to play. If they want to have sleepovers and stay up all night, there are no upstairs neighbors to worry about. Owning our home gave us the freedom to garden and grow vegetables, and host dinners and birthday parties. It also gave me the determination to learn how to fix things around the house,” Bailey said.

Bailey is now transitioning into a new, exciting venture of owning her own company. Read about Bailey Publishing House here and here.

“I encourage anyone who has a dream of owning a home to contact the URA. The URA can help carve a path to homeownership and provide hope and guidance to their participants,” Bailey said.