The goal of this RFQ is to select Developers to work to implement uses and further the concepts that have been articulated by the community as described in the 2015 Centre Avenue Corridor Redevelopment and Design Plan (Corridor Plan) included as Exhibit “A”, and Greater Hill District Master Plan (GHDMP) included as Exhibit “B”. Central to these plans are the following priorities: creating opportunities for minority and local Developers; revitalizing Centre Avenue as the neighborhood’s primary retail, institutional, and cultural node as well as a strong residential neighborhood; building upon the African American cultural legacy; creating family-friendly housing without displacement; fostering economic empowerment; and producing comprehensive sustainability and quality design. Interested Developers should familiarize themselves with the principles in these planning documents, and any future proposed development should reflect these concepts.

The URA issued an initial RFQ in July 2019.  Responses were due in October 2019.  This RFQ has been amended to reflect a revised list of available sites accounting for projects and commitments made in prior phase(s). Following the Qualifications Due Date listed below, the URA will:

Following initial URA Board vote, the URA will then re-release this RFQ for a third round, amended to reflect a further revised list of available sites accounting for projects and commitments made in prior phase(s).

Any recommendation to the URA Board of Directors is neither a commitment of financial nor other public subsidy and must be taken into consideration by Developers. There is the availability of several sources of pre-development and project financing as described in Section 4d in this RFQ. Developers meeting the thresholds or requirements will have the opportunity to apply for or pursue these sources independent from this RFQ evaluation and selection process.

A tentative schedule for the selection process is below. This schedule is subject to change. If there is a schedule change, it will be posted as an addendum on Public Purchase.

Developers must be available for the following meetings and deadlines:

Please note: The above opportunities are encouraged but not mandatory. Private appointments will not be scheduled.

a. Interested Developers should plan to join the below Zoom webinar from your computer, tablet, or smartphone.  https://zoom.us/j/968114867

You can also dial in using your phone.

b. Structures included in the RFQ will be made available to tour. Representatives from the URA and City will be available.Please RSVP your attendance via email to propertyquestions@ura.org no later than Monday April 6, 2020 at noon ET.  Please note that if no RSVPs are received, this site tour will be cancelled.  **This site tour has been cancelled**

c. A second Site Tour is available closer to the qualifications due date. Structures included in the RFQ will be made available to tour. Representatives from the URA and City will be available. Please RSVP your attendance via email to propertyquestions@ura.org no later than Friday, May 1, 2020 at noon ET.  Please note that if no RSVPs are received, this site tour will be cancelled.  **This site tour has been cancelled**

Due to the need to cancel both site tours to follow the restrictions for COVID-19, the URA is exploring alternative options.

d. Redevelopers who intend to submit a response to this RFQ must submit a Letter of Interest (LOI) on or before the date shown above.  Requirements of the LOI are defined in Section 5 below.  Please email your LOI to propertyquestions@ura.org. 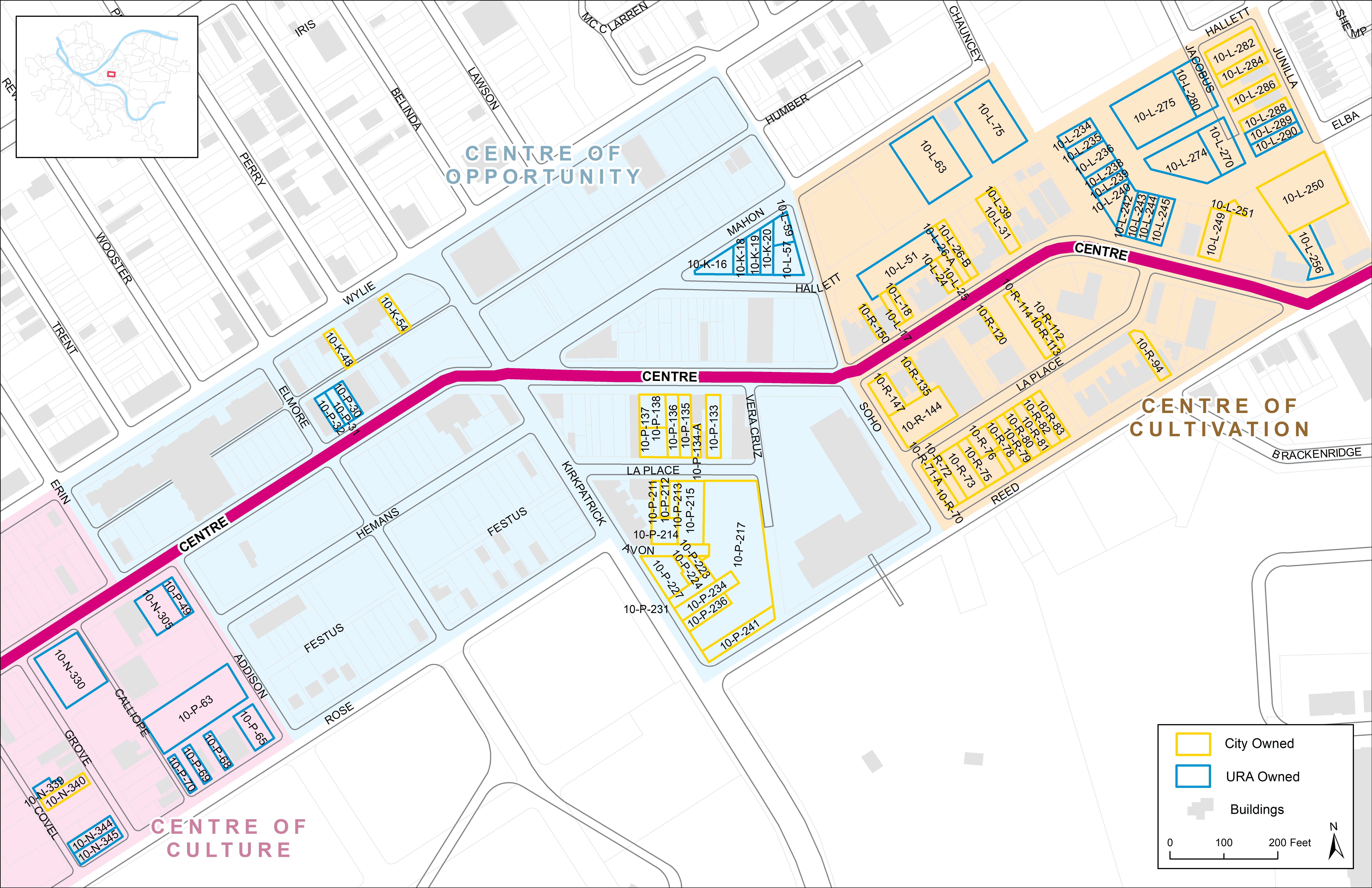 The URA is the economic development agency for the City, committed to creating jobs, expanding the City’s tax base, and improving the vitality of businesses and neighborhoods within the City. Incorporated in 1946 as one of the first redevelopment authorities in the United States, the URA achieves this mission by assembling, preparing and conveying sites for major mixed-use developments and by providing a portfolio of programs that include financing for business location, relocation, and expansion, housing construction and rehabilitation, and home purchases and improvements, among many others. The URA conducts these activities using unique powers granted by the Commonwealth’s Urban Redevelopment Law to deploy and attach conditions to the use of public subsidy and the disposition of publicly-owned land. The URA is also committed to equitable development and incorporates best practices for equity and inclusion into its internal and external policies and activities.

The URA is a legal entity separate and distinct from the City. The URA works closely with the City in fulfilling its redevelopment mission.

The Hill District is the historic and cultural center of Pittsburgh’s African American community nestled in between the employment centers of Downtown Pittsburgh and Oakland. Comprised of five neighborhoods, the Hill District was originally populated by new immigrants to the City post-Revolutionary War. It had become a nationally-renowned African American economic and cultural center by the 1920s, boasting arts and culture legends such as Duke Ellington, Ella Fitzgerald, Count Basie and Cab Calloway. The Pittsburgh Keystones, one of the first African American owned Negro League baseball franchises, operated in the Hill from 1921 to 1922 at the Central Amusement Park Stadium.

The Great Depression and federal housing policies wreaked economic and physical havoc on the Hill. By 1954, there were nearly 3,500 public housing units there. Within the next decade, 95 acres in the Lower Hill were leveled under the Urban Renewal Program and the Federal Aid Highway Act to build the since-demolished Civic Arena; former home to NHL’s Penguins. More than 8,000 residents, businesses and institutions were displaced.

The Hill District remains physically separated from Downtown by large expanses of parking lots and a 1960s-era depressed highway which sits on what was once a thriving neighborhood, the Lower Hill. Efforts are underway to reconnect the Hill District to Downtown Pittsburgh, including the redevelopment of the 28-acre former Civic Arena site, reconnecting portions of the original Lower Hill street grid, and building a 3-acre “Cap” park over the depressed I-579 Highway so pedestrians can safely and comfortably travel between the Hill District and Downtown.

Despite the economic and social dislocations, the Hill continues to be a center of African American culture in the region and continues to foster cultural creativity. The Hill District is a predominantly African American neighborhood with 88.3% of residents being African American, compared to a 26.3% City average.1   The Hill has had flourishing development along Centre Avenue through the Middle Hill. Most new commercial investment has been made between the 1800 and 2100 blocks of Centre Avenue, as new retail and institutions like the AUBA Triangle Shops complex (including a new 29,500ft2 supermarket and Duquesne University-operated pharmacy) have opened. There are several significant neighborhood anchors along the corridor including the newly constructed Thelma Lovette Family YMCA and a new Carnegie Library branch.

The Corridor Plan, completed in June 2015, was drafted as an embodiment of the aspirations for the business district and identified three nodes along the length of Centre Avenue that would each hold its own character: Centre of Culture, Centre of Opportunity and Centre of Cultivation. It advocates for mixed-use development with active, programmed ground floors. The Corridor Plan prioritized the realization of that vision through implementing projects such as the restoration and re-use of the New Granada Theater, Nafasi on Centre and MOKA Art Gallery.  When complete, the New Granada will anchor the Centre of Culture and include theater, event, and office spaces. Nafasi on Centre and MOKA will both provide artists with live-work space within the Centre of Opportunity. A copy of the plan is included as Exhibit “A.”

The GHDMP was completed in June 2011 and is broken down into two components: Program Initiatives – policies and programs that will help attain community goals, and Urban Design Proposals – projects to improve the physical environment and leverage development. The Centre View section of the plan calls for reinforcement of Centre Avenue as the Hill District’s primary retail, institutional, and cultural node as well as a strong residential neighborhood. A copy of the plan is included as Exhibit “B.”

The City and community partners will shortly begin a process to update and enhance the GHDMP. This approximately year-long process is intended to culminate in the formal adoption of the neighborhood plan. Once adopted by the Planning Commission, the plan will become City policy and guide public and private investments in the area. New land use regulations, transportation and infrastructure improvements, and public programs may also be recommended by the plan.

d. Public Funding and Other Considerations

More information on the PBV/Gap Financing Program Guidelines can be found in Exhibit “E.” Questions about the HACP program should be directed to Jung Wook (JW) Kim, Director of Planning and Development at JungWook.Kim@hacp.org or 412-456-5020.

Redevelopers who intend to submit a response to this RFQ must submit a Letter of Interest (LOI) on or before the date shown above.  The LOI must include: The Development team’s name and contact information; a list of team members; a list of parcels you intend to respond for; and a summary of your proposed concept and intended use.  Please email your LOI to propertyquestions@ura.org.

Please note that the URA is currently using Public Purchase as its RFQ platform.

Developers must register online at: www.publicpurchase.com and submit their RFQ response through the Public Purchase platform.  Additionally, five (5) hard copies and one (1) electronic copy containing one (1) PDF file (flash drive or email) should be sent to the address below on or before the due date shown on the cover of this RFQ:

All questions regarding this RFQ should be submitted through the Public Purchase platform.

See Instructions for Registering on Public Purchase in Exhibit “F.”  The URA will not reimburse firms for any expenses incurred in preparing responses to this RFQ.

The following response requirements will serve to establish a Developer’s overall qualifications to complete their proposed project concept and meet requirements and obligations associated with the disposition of land by the URA.

Please note this is an RFQ, which outlines basic project concepts, capacity, and baseline feasibility. If you have more detailed plans than are required, please feel free to include as part of Other Information (Item 12) below. If your project is selected to proceed, you will be invited to submit a full Redevelopment Proposal Package which will include more detailed information, including but not limited to: drawings, schematics, and project financials (budgets, sources and uses, e.g.).

Each RFQ response should include the following:

Should the URA Board select a respondent as a Developer, such Developer will be required to comply with the URA’s Disposition Process. The URA will not close on a property until all the terms of the disposition process are fulfilled. See Exhibit “D” for Disposition Process Overview.

The URA shall have the right to verify the accuracy of all information submitted and to make such investigation as it deems necessary to determine the ability of a Developer(s) to perform the obligations in the response. The URA in its discretion reserves the right to reject any response for any reason, including when the available evidence or information does not satisfy the URA that the Developer(s) is qualified to carry out properly the obligations of the response; is a person or firm of good reputation or character for strict, complete and faithful performance of business obligations; or if the Developer(s) refuses to cooperate with and assist the URA in the making of such investigation.